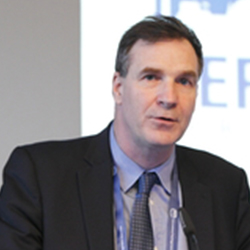 Professor Laidlaw qualified as a clinical psychologist in 1995 and initially worked in a split adult mental health and older adult post with NHS Fife in Scotland. In 1997 he was among some of the first graduates of the South of Scotland post-qualification Course in cognitive behaviour therapy (CBT).  In 1998, he took up a split academic and clinical post. In 1999 he was awarded a Winston Churchill Fellowship and travelled to the US to meet experts in CBT. From 1999 to 2000 he was invited to spend a year at University of Pennsylvania (PENN) in Philadelphia with Aaron T. Beck. In 2006 he was awarded a PhD,  completed part-time while working academically and clinically.

Ken has always maintained a strong clinical commitment in the past and was the manager and clinical lead for an older adults service in Edinburgh prior to his appointment at UEA. He has a keen and active research profile. He was the Principal Investigator on the first UK RCT of CBT for late Life depression. His manual for this trial has subsequently been used in other clinical trials. He also led the development of the creation of a cross-cultural Attitudes to Ageing Questionnaire (AAQ), that was pilot and field trialled in 20 countries worldwide. His conceptualization framework for CBT with older people is part of the IAPT curriculum materials for HI IAPT workers.

Between 1998 to 2013, Ken worked on the University of Edinburgh DClinPsychol Clinical Psychology Programme as Senior Lecturer. When he was deputy programme director at Edinburgh, in partnership with NHS stakeholders and Commissioners he took the lead on the development of a new five-year model of Clinical Psychology training, ‘the flexible model of training’. During this time Ken secured British Psychological Society (BPS) Professional Accreditation for the flexible training programme. As part of this initiative, Ken wrote the first Programme Specification for the DClinPsychol Training Programme at the University of Edinburgh. Ken also brought an innovative approach to the application of theory to practice and was responsible for introducing a highly interactive online online supportive clinical practice learning environment in older adults.

We are living in an age of unprecedented demographic change and the new cohort of older people are undoubtedly going to expect to have access to high quality evidence-based psychological treatments for depression and the anxiety disorders. As such therapists need to equip themselves with new knowledge, skills and competences to meet the needs of older people.

The workshop is based on a series of case examples drawn from routine clinical practice that will enable you to work effectively with older people.

CBT with Older People: Enhancing the Evidence-Base and meeting the needs of the new cohorts of older people

Older people are living longer than previous generations and as such Cognitive and Behavioural therapists are seeing much older clients than ever before. While the evidence-base suggests that CBT is efficacious for late life depression and the late life anxiety disorders there is virtually no literature and guidance on CBT with the oldest-old. Why this may be a problem is not solely due to increased comorbdity and complexity in clients aged in their 80s and 90s, but also because these clients often have value systems and cohort beliefs different from their therapists. What makes working with older people potentially more complex is that there are as many experiences of ageing as there are older people. Thus CBT therapists inexperienced in working with older people may have a lot to learn in order to feel confident with this client group. An evidence-based age appropriate approach to CBT to address these concerns is outlined in this keynote with useful guidance for therapists summarised in order to enhance treatment outcome with older people.