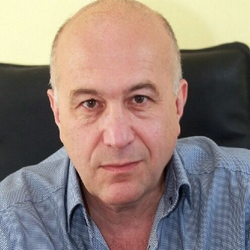 Dr Georgi Onchev is a clinical psychiatrist with 31 years of experience. He has worked in the Psychiatric Hospital Lovech, Bulgaria (1987-1989), and since 1989 he is with Alexandrovska University Hospital and the Department of Psychiatry, Medical University Sofia where he was appointed a full professor in 2012. His PhD thesis (1994) is on borderline personality disorder. Between 1996-1998 he served as an UNDP psychiatric consultant in Pemba, Tanzania.

His clinical and research experience is related to general psychopathology, personality pathology, schizophrenia, long-term follow-up of chronic psychoses, interplay between culture and psychopathology, psycho-social rehabilitation, and innovative assessment and care instruments. He is a co-founder of the Bulgarian Psychiatric Association (1992), and has been an expert in international consortia and taskforces on mental health problems and Principal Investigator in research projects of the EU Framework Programs. He has 110 publications, among them the monographs Personality Abnormality in Clinical Practice (2001, 2012), Coercion in Psychiatry: Empirical Evidence and Good Practice (2010), and the book Culture and Psychopathology: The Anthropology of Mental Illness (2017).

Post-truth and cognition: why bother?

The contemporary mass post-truth information landscape involves substitution of facts and values with falsehoods, and more subtly, near-truths, which are covertly closer to truth than to frank lie, and for this reason more unrecognizable. Net identities, artificial intelligence, and machine learning contribute also to distortion of the capacity to discriminate between news and facts, and thence, to cognitive blurring, and even to failure of the reality testing. The cognitive confusion and the virtual reality communications reflect both on psychopathology and diagnostics. Rapid culture and identity transitions cause pathomorphosis of clinical pictures and illness behavior styles. The impact on the current trend for overdiagnosis of psychopathology and pathologization of existential human problems, as well as on stigma and mental health care, are presented and discussed. In the digital age, people frequently seek advice and help, and even online treatment, through the internet. Care however is needed because there are data that digital treatments which fail can interfere with patients seeking higher intensity and better evidenced treatments. Safeguards and solutions to this problem will be considered.